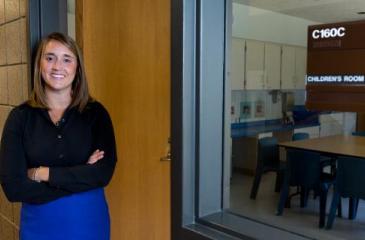 A community-University research team successfully influenced public policy earlier this month, when Minnesota Governor Mark Dayton signed a bill that helps care for pregnant, incarcerated women and their babies. Dr. Rebecca Shlafer, an assistant professor in the U of M's Department of Pediatrics, and Erica Gerrity of the local nonprofit Everyday Miracles both testified about how the bill could improve health outcomes.

The two have been actively researching the issue together ever since receiving nearly $25,000 from the Clinical and Translational Science Institute's Community Collaborative Grants Program.

"Never in my wildest dreams did I think we would be where we are now in such a short period of time. We are truly thankful for the initial community-university pilot grant from CTSI that made this partnership a reality."

This initial funding enabled the team to analyze and evaluate Everyday Miracle's Isis Rising project, which has been providing expectant inmates at the Shakopee Women's Prison with doulas who offer support, education, and training.

Their early results indicate that a doula care program may be a promising approach to improving health outcomes such as birth weights and maternal mental health. The program has already helped vastly decrease cesarean delivery rates, an outcome that could reduce the risk of complications and save taxpayer dollars.

Statistics show that in the year before Isis Rising systematically provided doula care at Shakopee, seven of 11 (63 percent) babies born to inmates were by costly cesarean section. The number dropped to one in 29 (three percent) among babies born with doula support (October 2011-October 2013). Also, no doula babies were preterm or low birth weight.

Shlafer (shown; photo credit: Brady Willette) knew more could be done to help the research reach the people who could benefit most. As the bill was making its way through the legislative process, she told the University News Service:

"I think Isis Rising is making great progress in its community-University partnership with the Department of Corrections to work together and support this population of women who need it. This problem is bigger than any one agency. It has to be a multisystem approach."

The collaborative research project helped lead to new legislation that has key provisions for pregnancy testing, postpartum support, doula care, and an advisory committee to study this topic. After making the jump from pilot funding to policy change in just a few years, Shlafer noted:

"Never in my wildest dreams did I think we would be where we are now in such a short period of time. We are truly thankful for the initial community-university pilot grant from CTSI that made this partnership a reality."