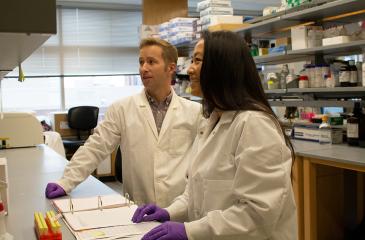 In a study partially funded by CTSI and recently published in the scientific journal Cell, University of Minnesota researchers Dan Knights and Pajau Vangay, and researchers at Somali, Latino, and Hmong Partnership for Health and Wellness (SoLaHmo), a community-driven research program of West Side Community Health Services, found evidence that gut microbiota of populations immigrating from Southeast Asia rapidly Westernize after a person’s arrival to the United States.

“We found that immigrants begin losing their native microbes almost immediately after arriving in the U.S. and then acquire alien microbes that are more common in European-American people,” said senior author Dan Knights, PhD, in a press release. “But the new microbes aren’t enough to compensate for the loss of the native microbes, so we see a big overall loss of diversity.”

Previous research has shown that people in developing nations have a much greater diversity of bacteria in their gut microbiome, the population of beneficial microbes living in humans’ intestines, than people living in the U.S.

“But it was striking to see this loss of diversity actually happening in people who were changing countries or migrating from a developing nation to the U.S.,” Knights said.

The study utilized a community-based participatory research approach where members of the community were involved in designing the study, recruiting participants, and educating communities about the findings. Through CTSI’s Community Health Collaborative Pilot Grant Program, which supports community-university pilot research projects that address important health issues identified by Minnesota communities and aims to stimulate high-impact research that leads to health improvements, researchers worked with members of the Hmong and Karen communities in both Minnesota and Thailand. The program is managed by CTSI’s Office of Community Engagement to Advance Research and Community Health (CEARCH).

Besides coverage by the University of Minnesota and the College of Science and Engineering and the College of Biological Sciences, media coverage around this research by major media outlets includes: National Public Radio, New York Times, The Washington Post, The Atlantic, The Scientist Magazine, Star Tribune, Yahoo! News, and Discover Magazine. Look for a feature piece from CTSI later this month that highlights the community-based participatory research angle.