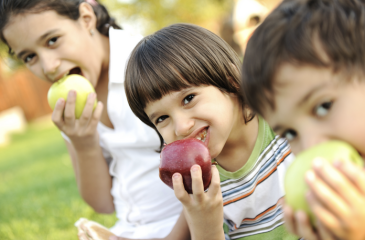 Data from the initial CTSI-supported study created a baseline for the 2016 follow-up survey, which was funded by the Center for Prevention at Blue Cross and Blue Shield of Minnesota.

Another bright spot: 61 percent serve a fruit or vegetable at every meal and snack. That's up 18 percent in centers and 8 percent in homes.

In addition, 80% of childcare centers provide at least one hour of active play each day, up 23 percent since 2010. Sixty-nine percent of home-based providers provide this amount.

Janelle Waldock, Vice President of Community Health and Health Equity at Blue Cross, who leads the organization’s Center for Prevention, spoke to the St. Cloud Times about the findings, saying:

"The progress is really encouraging to us in an important period in a person's life. Kids are getting off to the right start."

Waldock and the survey’s co-investigator Katie Loth, PhD, MPH, RD, an Assistant Professor in the Department of Family Medicine and Community Health at the University’s Medical School also discussed barriers and opportunities for action with the St. Cloud Times:

One of the major barriers providers list is the cost of healthy food, including fresh produce. Waldock suggests cooperative buying arrangements or working directly with farmers as options. Some are doing this, Loth said, and creating gardens and using community-supported agriculture programs.

Other providers cite a lack of time or staff to prepare fresh foods. Waldock said some vendors sell cut-up vegetables and other time-saving options.

The study team envisions a role for advocates too, as a Blue Cross news release describes:

Advocates are encouraged to think collaboratively about systems-level changes to improve access to healthy food and active play, to look for ways to connect providers to convenient and less expensive alternatives to traditional grocery stores, to expand training or educational opportunities, and to provide other supports for providers interested in creating healthier early care and education settings.

Initial CTSI support was critical to our ability to identify focused strategies that can help kids lead healthier lives.

Getting a jump-start from CTSI

CTSI support at the project’s earliest stages helped the University study team get the effort to where it is today, as Dr. Loth explains:

“Initial CTSI support was critical to our ability to identify focused strategies that can help kids lead healthier lives. Enhancing early childhood settings helps lay a strong foundation; a strong foundation helps kids to develop good habits that they can carry into adulthood.”

Dr. Loth was the co-Investigator for the 2016 study, while the 2010 study was headed up by University of Minnesota’s Susie Nanney, PhD, and University of Wisconsin’s Tara LaRowe, PhD.

An advisory group of stakeholders representing state agencies, local public health groups, non-profits, advocacy organizations, associations, and regulators provided guidance and helped shape both the CTSI-supported 2010 study and the 2016 survey. Many of the members were the same across both efforts, helping to add depth and consistency.

Blue Cross found value in the initial survey and became interested in supporting a follow-up survey due to the University study team’s alignment with Blue Cross’ community-based efforts in the early childhood arena.

In addition to providing a starting point that led to the 2016 survey, the study produced results that were widely disseminated.

For example, when University of Minnesota Extension noticed that providers surveyed in 2010 were willing to serve more whole grains, they took action.

Extension consulted with Minnesota government agencies and experts, who confirmed whole grains would be a good topic to incorporate into its training sessions for childcare providers. Whole grain training has since been offered in-person to more than 200 providers, and online to nearly 500 providers.

“The survey helps advocates understand childcare providers’ perspectives and frame up policy recommendations in a way that can best support providers and children alike.”

In addition, the Public Health Law Center uses the 2010 survey data in presentations and other resources, so people across the country can draw from it when advocating for improved nutrition and physical activity in early care environments.

“The survey helps advocates understand childcare providers’ perspectives and frame up policy recommendations in a way that can best support providers and children alike,” says Natasha Frost, JD, a Senior Staff Attorney with the Public Health Law Center. “For example, if a rural childcare provider doesn’t have access to healthy foods, mandating that they serve certain foods could drive them out of business. Instead, efforts could focus on ways to support providers -- and in turn, children -- by better connecting them to healthy foods.”

Both University of Minnesota Extension and the Public Health Law Center intend to incorporate 2016 data into their efforts as well.

Moving forward, the University study team plans to look at how the race, income, education, and geography of providers and parents impacts health choices and options.

“Our goal with is to utilize this data to answer the questions that are most meaningful and helpful to providers, trainers and advocates, and the individuals that spend time working day-to-day in child care environments,” says Dr. Loth. “There is currently great momentum within the state of Minnesota to improve the health and wellbeing of young people and we aim to provide the data needed to continue this momentum in the years to come.”