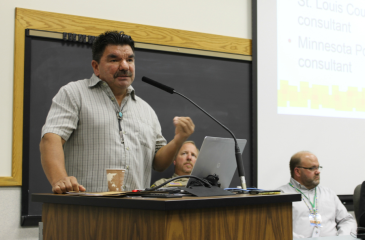 Ricky DeFoe addresses a packed room at Cloquet's Community Forum on Heroin and Opioid Abuse, sharing his experience in losing a daughter to a heroin overdose.

After seeing her rural Minnesota community struggle with a growing heroin and opioid addiction problem, University of Minnesota Assistant Professor Laura Palombi, PharmD, MPH, set out to do something about it.

Dr. Palombi  – working alongside a grassroots, drug abuse-focused task force – sought to hold a forum that would bring together members of the Cloquet, Minnesota community to find a solution.

Dr. Palombi and a fellow task force member ultimately secured a grant from the University of Minnesota’s Clinical and Translational Science Institute (CTSI) to support a community forum on heroin and opioid abuse, which successfully rallied the northern Minnesota town.

“The forum mobilized locals and enabled us to secure additional funding so we can replicate best practices in other rural communities hit hard by substance abuse,” says Dr. Palombi, who is an Assistant Professor at the College of Pharmacy’s Duluth campus. “We’d never be where we are now, had it not been for that initial CTSI support.”

Together, they sought to combat an issue that has personally affected many in their tight-knit town of approximately 12,000, and is a growing problem nationwide. In fact, drug overdose is the top cause of injury death in the U.S. -- surpassing motor vehicle deaths -- and opioid overdose rates are skyrocketing.

Centers for Disease Control and Prevention data shows that opioid overdose deaths in Minnesota increased by more than 500% between 1999 and 2014. Carlton County – where Cloquet is located – is hit particularly hard, with one of Minnesota’s highest rates of death from opioid overdose.

The task force sought to engage the community in tackling the issue, but lacked the resources to do anything like the community forum they’d dreamed of.

"The forum mobilized locals and enabled us to secure additional funding so we can replicate best practices in other rural communities hit hard by substance abuse."

Dr. Palombi teamed up with Laura Bennett – who serves on a community health board that oversees multiple northern Minnesota counties – to apply for a CTSI Dissemination and Implementation Award that funds projects that apply health strategies to the real world. The grant program is part of CTSI’s Office of Community Engagement to Advance Research and Community Health (CEARCH), which provides funding and guidance to enable teams of University researchers and members of the public to address health issues in ways that are truly relevant to their community.

To Dr. Palombi and the task force’s delight, they received funding to host the inaugural Carlton County Community Forum on Heroin and Opioid Abuse.

“CTSI has experts in community-engaged research who understand what it’s like to be part of a community-based team, and supported us along the way as we adapted to the needs of a broader group. They also gave us guidance along the way, such as on figuring out our timeline, coordinating schedules, selecting a location, and tackling the various challenges that came up along the way.”

The task force anticipated about 50 attendees based on similar events, and planned for 100. To their amazement, the October 2015 forum attracted more than 260 people, with attendance from local communities and the nearby Fond du Lac Indian Reservation.

“It’s amazing what this one event did, in terms of connecting a diverse group, sparking conversations about the issues, and mobilizing citizens to help make a difference.”

Attendees heard from a diverse group of panelists about a wide range of topics. For example, a treatment specialist explained how to help a loved one who struggles with addiction, a toxicologist described heroin and opioids’ impact from a medical perspective, and a respected tribal member shared his personal story of alcohol addiction and losing a child to a heroin overdose.

In addition, a question-and-answer session and time for socializing over food sparked a two-way dialogue, and acted as a sounding board. The task force invited attendees to join their team, helping the task force increase awareness and membership over the course of a couple hours.

“The forum marked a big first step in coming together as a community to address opioid and heroin abuse, a life-and-death issue that has affected so many of us,” says Amy LaRue, MA, CHES, a Public Health Educator with Carlton County Public Health & Human Services who serves as one of the task force’s leaders and would go on to co-present with Dr. Palombi at conferences. “It’s amazing what this one event did, in terms of connecting a diverse group, sparking conversations about the issues, and mobilizing citizens to help make a difference.”

With a successful and well-publicized forum under their belt, the task force relied on feedback collected at the event and via a follow-up survey to guide their next steps.

For example, the survey revealed a clear desire for educational activities, so the group ramped up efforts to educate the community via a second forum, newspapers articles, and monthly educational sessions. At the monthly sessions, different speakers talked about issues related to addiction, such as behavioral health care strategies, helping loved ones seek treatment, and the role of shame in substance abuse.

“I believe we can make a difference through community-based action research, in which researchers work directly with the community to understand what they need and find a solution,” says Dr. Palombi, pointing out that community engagement is part of the University’s mission as a land-grant university. “Substance abuse touches virtually everyone in our town, and it’s not going away unless everyone works together.”

The task force used the remaining CTSI grant funds for educational activities and to begin planning the next forum, to be held in October 2016. But they knew they’d need additional funding to keep the momentum going.

"There are best practices for rural communities that can be adapted nationwide, which we are working to identify and share broadly.”

Fortunately, the overwhelmingly positive community response and ongoing interest led other University units to provide additional support to sustain and expand activities. Dr. Palombi’s home department within the College of Pharmacy -- the Pharmacy Practices and Pharmaceutical Sciences Department -- secured funding from the University’s Office of Public Engagement that would support a second forum in Cloquet and an inaugural forum in nearby Moose Lake.

Moose Lake’s September 2016 forum followed a similar format as the first one in Cloquet, but Cloquet’s second forum will be set up differently to focus on specific questions and issues identified by the community. There’ll be separate rooms for various topics, from how parents can prevent substance abuse in children to how to break the cycle of addiction within families.

Additional forums and educational programming will enable the task force to continue developing strategies that can be shared beyond the Cloquet area.

“The process for engaging a community and finding solutions would differ between Cloquet and Minneapolis, and even between Cloquet and another rural town,” says Dr. Palombi. “But we do believe there are best practices for rural communities that can be adapted nationwide, which we are working to identify and share broadly.”

Dr. Palombi and collaborators have already begun disseminating their findings by publishing an article in the Journal of Rural Health and presenting at several conferences.

In doing so, they’ve drummed up substantial interest from communities, public health groups, and pharmacists across the state who are interested in adapting Dr. Palombi and team’s approach for their own communities. Dr. Palombi is now exploring ways to engage with fellow pharmacists and give them the tools they need to be successful.

“That first CTSI grant gave us the jump-start that propelled everything forward."

“People don’t often picture pharmacists doing this kind of work out in the community, but it’s absolutely something they’re capable of doing,” says Dr. Palombi. “We’re trying to find ways to support pharmacists who want to get out in their communities, and actively contribute to teams that are working to find solutions to substance abuse.”

To Dr. Palombi, none of this would be possible without that initial infusion of CTSI funds, which was also the first grant she’d ever received:

“That first CTSI grant gave us the jump-start that propelled everything forward. CTSI instilled confidence in the way we engaged our community to tackle an important health problem, gave us valuable guidance along the way, and enabled us to attract the additional funding we needed to advance our efforts.”