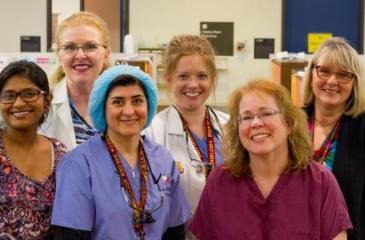 StudyFinder gives Minnesotans an easy way to explore University of Minnesota research opportunities, while supporting the study teams who need volunteers before their discoveries can help people.

At StudyFinder.umn.edu, visitors can find a study that’s a good fit for them via a simple, searchable interface, and then connect with the research team.

“Nearly 70 people contacted us to express interest in one of our studies after seeing it on StudyFinder, through virtually no effort on our end,” says Patricia Lenton, RDH, MA, CCRP, who directs the Oral Health Research Clinic at the University’s School of Dentistry and has conducted more than 50 clinical trials. “StudyFinder is the most innovative, efficient tool for recruiting participants I’ve used in my 27-year clinical research career.”

Lenton’s experience with StudyFinder began in August 2015, when the team launched a study to test a new over-the-counter dental strip designed to help people with sensitive teeth.

StudyFinder is the most innovative, efficient tool for recruiting participants I’ve used in my 27-year clinical research career.

“One of the biggest challenges for investigators is getting enough participants for their study,” says Melissa Mueller, MPH, CTSI’s Recruitment Service Manager and the tool’s co-creator. “This drove us to create StudyFinder, and continue exploring new ways to help University researchers achieve their recruitment goals.”

Researchers are already required to enter their studies on ClinicalTrials.gov, which houses more than 200,000 studies (as of July 2016) related to the treatment, diagnosis, and prevention of diseases or conditions. By automatically adding studies from the international registry, StudyFinder leverages existing information.

While ClinicalTrials.gov lists studies regardless of whether they’re enrolling along with a vast amount of information about each, StudyFinder is exclusively focused on helping Minnesotans find studies that currently need volunteers.

Select information about these studies from ClinicalTrials.gov is then displayed in an intuitive, user-friendly way to make it as easy as possible for potential participants to explore University research opportunities and select a study that’s right for them.

"StudyFinder is incredibly user-friendly for potential participants, and it couldn’t be easier for research teams.”

For example, StudyFinder.umn.edu only pulls key information from ClinicalTrials.gov, includes search functionality and enables people to explore studies by topics ranging from dentistry and prevention to cancer and infectious disease.

Lenton and team soon began receiving emails from people saying they found their study on StudyFinder, and wanted to participate.

“More and more people became interested in our studies through StudyFinder, and I could barely keep up with the screening calls,” says Lenton. “But what’s really amazing is that I didn’t have to do a thing. StudyFinder is incredibly user-friendly for potential participants, and it couldn’t be easier for research teams.”

Ultimately, the study received approximately 80 queries in seven months through StudyFinder. Nine of these individuals eventually became participants, making StudyFinder the source for 15% of the study’s participants.

“Like most researchers, getting enough volunteers to enroll in studies is hands down our number one difficulty when conducting a clinical trial,” says Lenton. “StudyFinder enhances our ability to recruit because it helps us quickly generate a tremendous amount of interest from potential participants.”

She adds that the 15% enrollment rate could have potentially been higher, had the study been listed on StudyFinder (via ClinicalTrials.gov) when they first began recruiting. StudyFinder was also likely driving referrals, which the calculation wouldn’t have given StudyFinder credit for, even if it was a direct contributor.

“It’s not just who joins our study via StudyFinder, but whomever they talk to about the study as well,” explains Lenton. “Our participants regularly share their research experience with friends or family members who may be a fit, helping us attract even more volunteers via word of mouth.”

Streamlining research, from start to finish

StudyFinder’s benefits went beyond participants for Lenton. She noted there were time-savings on every front as well.

Because nine of the study’s participants came to them via StudyFinder, it meant they saved whatever time, money, and energy it would have taken to eventually attract those nine volunteers.

“We don’t have to spend as much time promoting studies and screening participants, compared to fliers, presentations, and clinic visits. These traditional recruitment methods are more time-consuming, and don’t always yield results.”

Participant screening is more efficient too, due to the digital nature of StudyFinder.

Individuals can then quickly determine for themselves whether they think they are a good fit for the study.

Typically this initial screening conversation occurs via phone, with Lenton verbally sharing the same information dozens, often hundreds, of times for each study. Shifting this discussion online saves time, and gives participants another option for receiving study information and engaging with the study team.

“StudyFinder is an incredibly efficient, effective tool, in terms of the overall effort it takes to attract and enroll each participant in one of our studies,” says Lenton. “We don’t have to spend as much time promoting studies and screening participants, compared to fliers, presentations, and clinic visits. These traditional recruitment methods are more time-consuming, and don’t always yield results.”

Lenton suspects part of this has to do with the kind of people who are using StudyFinder:

“Unlike approaching someone in a clinic about a research opportunity, potential participants who connect with us via StudyFinder are already open to the concept of participating in research. They typically understand what research is all about, have used StudyFinder to find an opportunity that’s right for them, and then approach our team about joining the study.”

“We hadn’t even launched the study, and 70 people have already inquired about it through StudyFinder. That kind of interest is unheard of.”

After the dentinal sensitivity study hit its enrollment goal, Lenton and team started recruiting for another study, which aims to evaluate a new method for preparing dental implant sites prior to placing a dental implant.

As with the previous study, StudyFinder pulled the research opportunity from ClinicalTrials.gov, and Lenton and team quickly began receiving emails from interested participants via StudyFinder.

“We hadn’t even launched the study, and 70 people have already inquired about it through StudyFinder,” says Lenton. “That kind of interest is unheard of.”

It’s too soon to tell how many will qualify and enroll, but Lenton’s optimistic. She points out that these individuals have received information about what the study will entail, and many think they meet the requirements, which ask that they intend to have their dental implant placed at the School of Dentistry.

Now Lenton and team are about to kick off a similar study on implant-supported dentures, set to begin enrolling -- and appearing on StudyFinder -- in early fall 2016.

The StudyFinder website is one part of CTSI’s overarching effort to give people an easier way to participate in research, while helping research teams be more successful.

Lenton cited CTSI’s StudyFinder presence at the State Fair – which annually attracts approximately 1.8 million attendees over 10 days – as an example.

The University’s Driven to Discover Building at the fair housed the interactive StudyFinder kiosk, which features videos sharing participant stories and iPads that enable visitors to explore and connect with studies. The kiosk was staffed all day, every day, to engage visitors about research and answer their questions.

“CTSI helps University study teams by reaching out to the broader community, and making Minnesotans more aware of the study opportunities at the University,” says Lenton. “It goes a long way in helping people understand how they can make a difference through research, and discover a way to participate, whether through one of our studies or the hundreds of other University studies happening at any given time.”

StudyFinder is also featured on Fairview’s MyChart tool and included on monitors and iPads at M Health’s Clinics and Surgery Center to help connect clinic patients with study opportunities. In the first few months after the opening of the Clinics and Surgery Center, StudyFinder usage has more than doubled, helping to drive referrals to research teams.

In addition, a StudyFinder website widget enables University of Minnesota schools, colleges, departments, centers, and other groups at the University to embed StudyFinder’s search box directly onto their website.

CTSI’s Recruitment Center has also been expanding StudyFinder beyond the University, in line with a nationwide need to make it easier for patients to find a trial. Vice President Joe Biden articulated this need in a nationwide address to researchers, citing the National Cancer Institute's new tool for people interested in joining a cancer trial as an example.

By using open-source code, StudyFinder enables research institutions across the country to customize the tool. Two major institutions have already adopted StudyFinder to give their own communities a go-to place for discovering research opportunities.

“StudyFinder has transformed the way we recruit participants. It’s given us a better, more efficient way to reach and connect with people who are a fit for our studies, so we can explore treatments and therapies that could eventually help people.”

“StudyFinder has transformed the way we recruit participants,” says Lenton. “It’s given us a better, more efficient way to reach and connect with people who are a fit for our studies, so we can explore treatments and therapies that could eventually help people.”