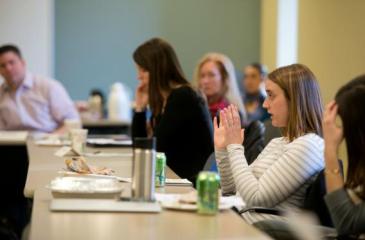 Rebecca Shlafer participates in a seminar during her time as CTSI Scholar.

CTSI-supported research led to new Minnesota legislation that keeps incarcerated mothers and their newborn babies together. The Healthy Start Act, the first legislation of its kind nationwide, has been covered in NBC, the Washington Post’s The Lily, and the Star Tribune, and takes effect this month.

Research from CTSI grantee and former Scholar Rebecca Shlafer, PhD, MPH, and the Minnesota Prison Doula Project supported the push for the new bill using data on the physical and mental health effects on mothers and babies when they are separated shortly after birth.

“I not only consulted, but helped craft some of the legislative language,” said Rebecca, Assistant Professor in the UMN Department of Pediatrics and Research Director for the Minnesota Prison Doula Project. “Our data were directly used to inform the proposed legislation. I also was one of two testifiers for both the house and the senate on the legislation.”

Rebecca and the Minnesota Prison Doula project received their first research support from CTSI in 2011, through a community engagement pilot grant. This support allowed the organization to start evaluating the program they had at the time for women in prison in Shakopee, and initial data to determine the physical and mental health needs of pregnant people who are going to deliver their babies in custody.

She credits the success of the legislation to multiple avenues of support, including the continuum of CTSI support and other UMN departments, like the Program in Health Disparities Research.

“We were able to use the data that we collected for the last ten years to make a strong and compelling case for this piece of legislation, which addresses moms’ and babies’ needs, which are not being met in the current status quo,” said Rebecca.

The initial pilot funding also led to more opportunities over the subsequent decade, which was instrumental in gathering the needed support for the legislation to pass.

“That grant has planted the seed that has grown over time, that has given us pilot data that led to other pilot grants, to larger grants, to continue programming and services,” said Rebecca, who also participated in CTSI’s Pre-K Discovery Scholars program and KL2 Scholars Career Development program while continuing her research on maternal and infant health.

A foundation of health equity and community engagement

Over the past decade, Rebecca and the Minnesota Prison Doula Project have engaged deeply with the population of incarcerated pregnant people and mothers, a process that has revealed deep health and systemic inequities across race and ethnicity. For example, Native women make up less than 1 percent of Minnesota’s population, yet represent 25 percent of the pregnant people who are in prison. Rebecca adds:

“We have such incredible racial disparities in our criminal legal system but this is also coming to a head with our abysmal maternal morbidity and mortality when we think of Native women, Black women, and women of color in general in terms of their birth outcomes. There are critical, intergenerational consequences for maternal and child health.”

She also appreciates being able to engage deeply and directly with the affected population.

“I think it is a testament to interdisciplinary collaboration, long-standing community partnerships that have taken a long time to build and foster, and really centering the lived experiences of incarcerated women, in every step that we took; really listening to them and their needs. And not me coming up with the solutions in my office or thinking through the policy ideas, but really, truly, following their lead and identifying solutions that would address those needs.”

The potential for translational science

Rebecca shared that the passing of legislation based on research showed what’s possible for translational research over the long term.