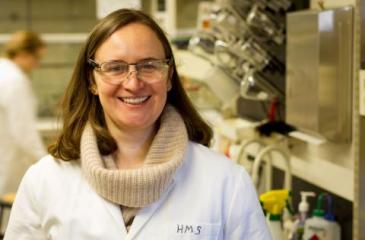 One idea they’re working to advance is that of University of Minnesota Associate Professor Valerie Pierre, PhD. She envisions a cheap, easy-to-use diagnostic tool that could provide a faster way to diagnose bacterial infections. Initial funding, guidance, and support from CTSI proved such a tool could be feasible, and a subsequent award that’s co-administered by CTSI is now enabling her to develop a prototype.

Dr. Pierre discovered first-hand just how frustrating current approaches to diagnostics can be when doctors thought her son, then three months old, may have contracted meningitis. The hospital told her they’d have spinal tap results in 48 hours, which Dr. Pierre found absurd.  As a chemist, she thought it would be possible to design new diagnostics to test samples like spinal fluid in less than 10 minutes. While her son ended up being okay, she knew that wasn’t always the case and resolved to find a better way.

Lifting the idea off the ground 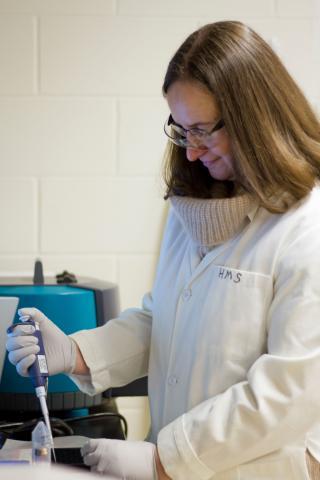 The grant awarded Dr. Pierre with $50,000 to establish proof-of-concept for her diagnostic tool. CTSI worked closely with Dr. Pierre to help her take some of the first steps along the translational path. This included helping her refine the project’s scope, creating a development strategy, mapping out the project, and consulting on a wide range of topics, such as patents and regulatory issues.

“Engaging CTSI early in the process, back when I simply had an idea for a new diagnostic tool, was critically important,” says Dr. Pierre, an Associate Professor in the University’s Department of Chemistry, part of the College of Science and Engineering. “Their expertise enhanced the quality of my translational project, and is maximizing its chance for success.”

For example, while Dr. Pierre initially sought to determine the feasibility of a tool for diagnosing any bacteria infection, CTSI advised her to narrow the focus so it could have the best chance of success. So the project scope narrowed to focus on creating a tool that could detect urinary tract infections (UTIs), which approximately half of all women contract in their lifetime.

Like many bacterial infections, the way this particular infection is diagnosed could be improved. The most accurate way is to analyze urine culture, which typically takes 48-72 hours. But because urgent treatment is critical, diagnoses are typically based entirely on the symptoms a patient describes. While this helps to treat people quickly, it’s not the safest or most accurate approach.

In addition to turning to experts at CTSI, Dr. Pierre also relies on guidance from a project development team that CTSI formed exclusively for her, as a grant recipient.

This team provides project-specific guidance on a wide range of topics, including creating a development strategy, identifying translational steps and milestones, and overcoming barriers that pop up along the way. Dr. Pierre’s team taps into the combined knowledge of Philip Peterson, MD, who has clinical expertise in infectious disease; Robert Schumacher, PhD, who brings significant translational medicine experience to the table; and Chad Kieper, who could help properly protect Dr. Pierre’s intellectual property. This gives Dr. Pierre access to the necessary experts for putting her idea into practice. 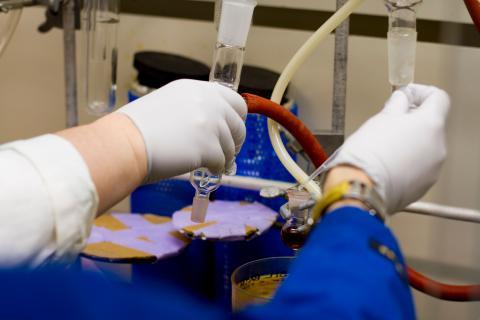 Together, CTSI and the project development team helped Dr. Pierre articulate the immediate milestones she’d need to hit along the way. These included:

Preliminary results showed Dr. Pierre’s proposed diagnostic tool could, in fact, accurately diagnose urinary tract infections and determine antibiotic resistance. She’d not only achieved the goal of this CTSI-funded project – to see whether the concept was feasible – but showed it was a good idea worth pursuing.

Several months later, Dr. Pierre applied for another, much larger grant opportunity: the Translational Product Development Fund (TPDF), which supports health research projects that have the potential to be commercialized. The program is a joint initiative among CTSI, the Mayo Clinic Center for Clinical and Translational Science, and the Minnesota Partnership for Biotechnology and Medical Genomics.

To their delight, the co-PIs became one of the grant program’s inaugural awardees this past year, and have the potential to receive up to $450,000 to advance the technology Dr. Pierre had begun developing. They received $50,000 upon being awarded, and if they successfully achieve their project milestones, they’ll be eligible for an additional $400,000 to continue development efforts. With funding in hand, they set out on their mission: to create a working prototype. 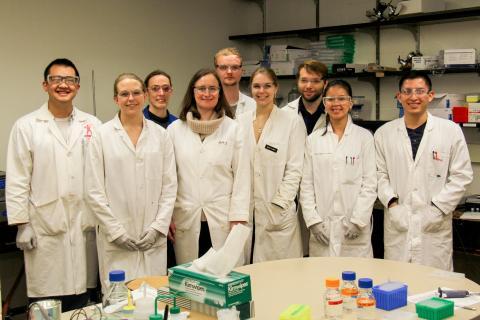 The two found a natural balance in their projects’ roles. Dr. Pierre and her University lab team led technology development, while Dr. Patel’s Mayo Clinic team tested the technology in a clinical setting, exactly where it’s intended to be used.

“If the person for whom your product is designed doesn’t want to use it, it’s not going to be successful. That’s a big reason why Dr. Patel and other clinicians at Mayo have been instrumental to the prototype development process,” says Dr. Pierre. “Because physicians are the ones who’d use this diagnostic tool, bringing them in to experiment with the product and provide their perspective is critical, and goes above and beyond anything we could have done in our lab.”

Dr. Patel and team test the tool using real clinical samples, something Dr. Pierre’s lab doesn’t have the capability to do due to the infectious nature of the pathogens. Dr. Patel then gives Dr. Pierre feedback on how to optimize the tool, weighing in on topics ranging from what works and what doesn’t to possible features and capabilities. It’s an iterative process, with an ongoing dialogue and plenty of fine-tuning along the way.

Poising the tool for success

Another area of focus is making sure the diagnostic tool can tackle regulatory hurdles and be accepted by insurance companies. Even though they’re years away from submitting the tool for FDA approval, the team has been laying the groundwork now, as they build a prototype.

“CTSI serves as a pipeline for translating my idea into a real solution that can help people."

Dr. Pierre, like many investigators, doesn’t consider regulatory know-how to be her area of expertise. So she turns to CTSI's Office of Discovery and Translation (ODAT), whose experts consult on these issues, helping her to anticipate and plan for the regulatory requirements ahead.

As an ODAT grantee, Dr. Pierre has exclusive access to expert guidance on a wide range of topics and receives dedicated support from ODAT staff members Sandra Wells, PhD, and Jodi Rebuffoni. Other University researchers can tap into this level of support by applying for one of ODAT's several grant programs. ODAT also offers more general consultations on early-stage translational research to all University researchers, at no cost to them.

Expert guidance, of course, is on top of what CTSI provides her as a grantee, in terms of funding and support from a dedicated project team. All of these things are giving Dr. Pierre what she needs to advance the technology she’s developing, as she explains:

“CTSI serves as a pipeline for translating my idea into a real solution that can help people. They have a smart, dedicated team that is guiding me on how to develop the technology, connecting me with other experts and resources, and giving me the funds that make all of this possible.”

Dr. Pierre’s latest project with Mayo is in the early stages, but they’re already looking ahead to what’s next. 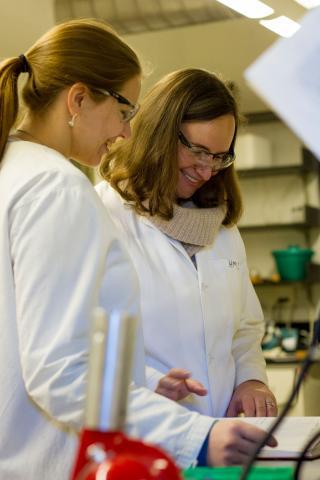 “I’m passionate about applying science in a way that’s truly useful and can save lives. That’s what drives me, and is propelling this product forward.”

At the time this story was published, they’re waiting to hear back about a large National Institutes of Health (NIH) grant they applied for, and received a good impact score on. Dr. Pierre credits CTSI for helping to position her well for the grant, such as through the preliminary results she leveraged and the translational team that was built around her.

Ultimately Dr. Pierre envisions a day when her diagnostic tool is available not just through a clinic visit, but from drugstores too. This would give people a quick, easy, and cheap way to see if they have a bacterial infection, and what drug can most effectively combat it.

She also sees the tool evolving into a platform for a range of infectious diseases, beyond urinary tract infections. For example, she’s currently fine-tuning the product to explore using it to diagnose bacteremia. The blood infection is deadly, and moves quickly; mortality rates skyrocket after just 24 hours.

Regardless of what the future holds for this particular diagnostic tool, Dr. Pierre will be working tirelessly to create a healthier future for everyone:

“I’m passionate about applying science in a way that’s truly useful and can save lives. That’s what drives me, and is propelling this product forward.”