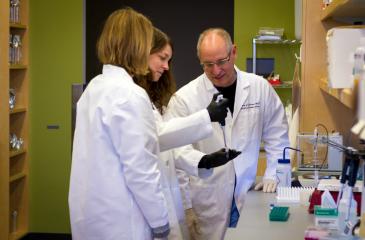 Dr. Greg Beilman and team studying BHB/M, a potential therapy that could help people survive severe blood loss, at the University of Minnesota.

A treatment being co-developed by a team of University of Minnesota researchers has a lot going for it: Strong scientific data, a dedicated cross-disciplinary team, and the potential to address an unmet medical need that kills as many as 60,000 Americans every year.

But, like many researchers, the team has encountered significant challenges trying to make the jump from basic science to real-world treatment.

The leap is so formidable that it has become known as the “valley of death” among researchers, because of how many promising ideas perish due to factors such as a lack of funding and technical expertise. It can take more than a decade to bring a drug from discovery to the market and the failure rate exceeds 95 percent, according to the National Institutes of Health (NIH).

Fortunately, CTSI and other University groups have rallied around this promising treatment with the funds, support, and expertise needed to survive the valley of death and advance it closer to the point of helping people.

The novel treatment, called D-Beta-hydroxybutyrate/Melatonin (BHB/M), is based on hibernation biology and could help people survive severe blood loss by giving them more time to reach the hospital.

University of Minnesota Professor Greg Beilman, MD, envisions that medics working on the front lines – say a first responder at the scene of an accident or a combat medic on a battlefield – would use an IV to inject BHB/M into the veins of people suffering from hemorrhagic shock, which occurs when the body begins to shut down after losing massive amounts of blood.

Preliminary research suggests BHB/M could help keep these patients alive longer and save those who currently die during transport or upon arrival to a hospital.

“There’s no way I could have developed the treatment on my own. Fortunately, the Committee for Pharmaceutical Development has given our team access to experts who can help advance our treatment closer to the point of helping people.”

For example, research by BHB/M inventors Dr. Beilman, Matthew Andrews, PhD, and Lester Drewes, PhD, has shown that BHB/M has allowed animals experiencing hemorrhagic shock to survive four times longer than they would have without the treatment.

The idea for a BHB/M therapy emerged from basic research by Drs. Andrews and Drewes, who initially discovered that two separate compounds – D-Beta-hydroxybutyrate and Melatonin – played an important role in allowing hibernating mammals to survive extreme reductions in blood flow and oxygen consumption. Drs. Andrews and Drewes have been long-time collaborators at the University of Minnesota’s Duluth campus (note: Dr. Andrews has recently taken a new position at Oregon State).

Bringing such a therapy to humans has enormous potential to save lives. Dr. Beilman notes that annually, between 300,000-400,000 people in the U.S. suffer from hemorrhagic shock. He estimates that 45,000 to 60,000 of these patients die every year.

Despite BHB/M’s potential, attempts by two startups to commercialize it didn’t succeed, due to the recent recession and other factors unrelated to its scientific merit.

That’s when the University’s Committee for Pharmaceutical Development (CPD) jumped in, to breathe new life into a treatment that was at a stalemate from a commercial development standpoint. The University’s Technology Commercialization are had been heavily involved in commercializing the therapy, and referred BHB/M to CPD after the University re-acquired the license.

CPD helps University faculty researchers bring therapeutics from basic research into clinical practice via funding and strategic guidance. The program is part of CTSI’s Office of Discovery and Translation (ODAT), which helps advance promising ideas and discoveries along the translational path.

“There’s no way I could have developed the treatment on my own,” says Dr. Beilman, a Professor with the Department of Surgery at the University of Minnesota Medical School, who’s also a surgeon and investigator. “I’m not a product development expert, and I’m not someone who understands the nuances of FDA requirements. Fortunately, the Committee for Pharmaceutical Development has given our team access to experts who can help advance our treatment closer to the point of helping people.”

The Committee for Pharmaceutical Development infused new life into our treatment idea, and propelled it toward clinical trials. We would not be where we’re at now without its support.

Dr. Beilman’s CPD advisors created a comprehensive plan detailing the steps needed to secure Food and Drug Administration (FDA) approval for a Phase I clinical trial, and helped him revive efforts to develop the promising treatment. For example, CPD supported a key preclinical study as well as efforts to engage the FDA to ensure development activities were on the right track.

In July 2016, Dr. Beilman and the broader project team – including his CPD advisors – met with the FDA with the hopes of securing feedback and support on what they planned to do before completing the FDA’s Investigational New Drug (IND) application. The FDA responded positively, validating the team’s plan for forging forward.

“The Committee for Pharmaceutical Development infused new life into our treatment idea, and propelled it toward clinical trials,” says Dr. Beilman. “We would not be where we’re at now without its support.”

Securing support from other University programs

After a successful FDA meeting, efforts snowballed, with Dr. Beilman securing funding from two additional University programs in a matter of months.

He applied for and received an award from the Translational Product Development Fund, which supports projects that have the potential to be commercialized and is another program from CTSI’s Office of Discovery and Translation.

The program is providing Dr. Beilman with funding and expertise to support the manufacturing activities necessary for BHB/M to complete the preclinical safety studies required by the FDA. He received $50,000 upon being awarded, and if he successfully achieves the project milestones, he’ll be eligible for an additional $400,000 to continue development efforts.

A few months later, the University’s Center for Translational Medicine (CTM) allocated up to $2.5 million in milestone-based funding to support the BHB/M project. The Center has infrastructure, expertise, and resources to translate early-stage drugs, biologics and devices into clinical candidates.

“The further the University can advance promising treatments like BHB/M along the development continuum, the more attractive these treatments are to parties outside the University who could ultimately develop them to impact human health.”

The CTM funds will enable the BHB/M team to complete the remaining preclinical steps in the CPD-created development plan, and ultimately file for clinical trial approval.

For example, CTM will use the funds to conduct preclinical safety, genotoxicity, and toxicology studies necessary to support an IND application with the FDA. A multidisciplinary team assembled and led by CTM will guide the BHB/M project through the necessary preclinical testing and development.

Maximizing its potential to help people

Ultimately, a combined $3.25 million in investment from translational development programs across the University is giving BHB/M a shot at success, a story covered by Twin Cities Business and the Twin Cities’ ABC affiliate KSTP-TV. This is in addition to the earlier support provided by two U.S. military groups: the Defense Advanced Research Projects Agency (DARPA) Surviving Blood Loss Program beginning in 2005, and the Army’s Medical Research and Materiel Command.

“Various University groups came together to contribute their expertise and resources, thereby maximizing BHB/M’s potential for success,” says Tucker LeBien, PhD, who serves as the Academic Health Center’s Associate Vice President for Research and directs CTSI’s Office of Discovery and Translation. “The further the University can advance promising treatments like BHB/M along the development continuum, the more attractive these treatments are to parties outside the University who could ultimately develop them to impact human health.”

Dr. Beilman agreed, noting the University’s investments would help to make BHB/M “an easier sell” to external funding mechanisms looking to test its safety and effectiveness in humans via Phase I and II clinical trials.

“Developing new drugs is incredibly challenging, but we keep persevering because there’s a very real possibility that our treatment could save lives.”

To Dr. Beilman, there’s an added personal desire to see BHB/M succeed. Having spent 25 years in the military, he has seen people suffer from the exact injuries that BHB/M is designed to treat. In fact, he estimates that bleeding out represents three-fourths of all potentially preventable deaths on the battlefield.

His desire to protect fellow soldiers and civilians drives him forward, as Dr. Beilman explains:

“Developing new drugs is incredibly challenging, but we keep persevering because there’s a very real possibility that our treatment could save lives.”