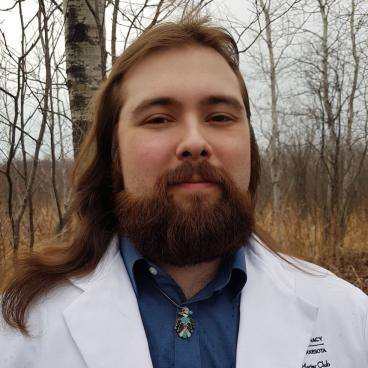 Under the mentorship of Dr. Laura Palombi, Lucas has honed his research skills through community based qualitative research studies that consider Native American opioid use disorder, and additional Native American health topics. Lucas is currently Dr. Palombi’s lead researcher, one of his roles is to recruit and train new project team members.

Along with his work on Dr. Palombi’s research team, Lucas is also employed as a graduate research assistant at the Johns Hopkins University Center for American Indian Health Great Lakes Hub under the mentorship of Dr. Melissa Walls. In this capacity, Lucas is involved in research on substance use and American Indian health. Lucas has demonstrated his research excellence since his undergraduate years when he was the recipient of UM Morris Scholar of the College Award. He was part of research and project teams that received the 2020 National Health Outreach Priester Culture of Health Award as well as the 2020 Dean’s Distinguished Diversity and Inclusion Award.

As a University of Minnesota College of Pharmacy he continues to excel. In 2021, Lucas received the 2021 UM College of Pharmacy Dean’s Research Award and was also a top 10 recipient of the prestigious national US Public Health Service Excellence in Public Health Pharmacy Award. As a future career Lucas wishes to work in a rural setting with underserved populations; splitting his time between research and clinical work as a board-certified psychiatric pharmacist.